Austin TX - ARX's adaptive resistance exercise machines were put to the test and have come out on top! ARX offers many benefits over traditional weight-lifting regimens, including increased strength, fat loss, lean mass gain, and all with significantly less time spent working out.

A recent study published in the Journal of the American Council on Exercise put a group of weightlifters against a group utilizing an ARX adaptive resistance exercise machine. The two groups performed identical baseline tests before the main testing. The main tests were balanced so that both groups put equal effort even with differences in the time spent working out.

Both groups saw improvement over their 12-week test period, but the results from the ARX group were quite intriguing.

â? The resistance exercise group (ARX) achieved a 3.5 times greater maximum oxygen uptake increase than the weight-lifting group. This is especially impressive considering that this improvement usually comes from cardiovascular training and not resistance training)

â? Ultimately, the resistance exercise group (ARX) showed 90% better strength results with only 28% of the time spent working out when compared to the weightlifting group. 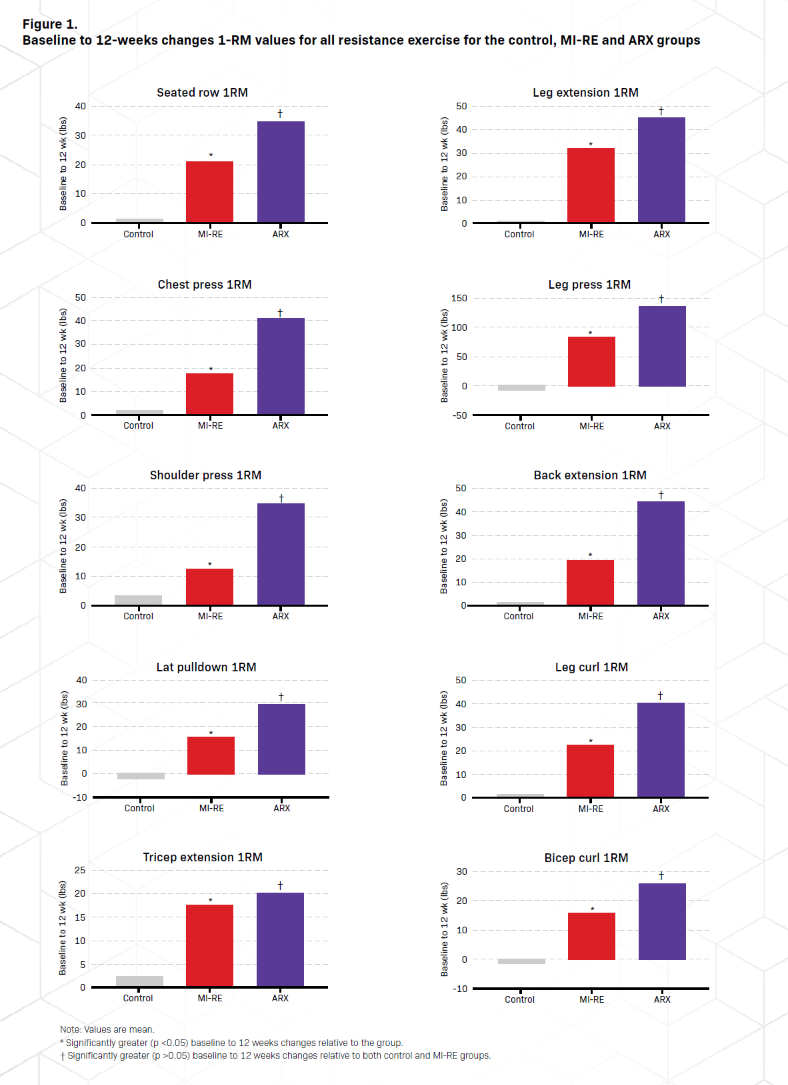 Even though the weight lifting group put in more time working out, ARX came out on top and by pretty wide margins. ARX offers all of the benefits of weight-lifting and more while requiring much less workout time resulting in a much smaller time commitment. Utilizing ARX provides a full-body workout proven to be highly effective and efficient.

It's worth noting that both groups' exercise programs were designed to be fundamental since they were created to be used by those looking to start strength training, not experienced strength trainees. While those new to strength training might assume that weight-lifting is the best option, this study provides conclusive proof that ARX is a much better, more productive choice in general.

How Do ARX's Workout Machines Work?

ARX uses a unique method of resistance, called Adaptive Resistance(TM), which allows each user to load their muscles with an adaptive amount of weight during each repetition.

Adaptive Resistance(TM) responds directly to the amount of force the user exerts. This technology takes the work of calculating resistance off of the user. In simpler terms, the harder a user pushes on the machine, the more resistance it provides.

This technology is a clear example of ARX's superiority over regular weight training regimens. Gone are the days when fitness enthusiasts needed a room full of weights or machines with preset amounts of weight that could only be added or taken away in specific intervals. ARX adapts with each rep, providing the ideal amount of resistance every time.

ARX machines are also designed to be used solo, so there's no need for a workout partner or a spotter. ARX will drop resistance accordingly if the user slows down at any point in their workout, allowing for a gradual cooldown instead of traditional weights, which weigh what they weigh no matter how tired the user is. ARX provides a perfectly matched workout in terms of resistance and, as proven by the study, better results than traditional weights!

ARX machines include software that allows users to track their progress over time and tracks individual workouts displaying performance data in easy-to-understand graphs. This data enables users to see how they progress toward reaching specific goals every time they work out.

ARX stores this information in the cloud and provides an option to share workout data with a personal trainer or trusted friend for added accountability and motivation.

ARX empowers and challenges individuals to achieve their fitness goals one perfectly calibrated repetition at a time. There are no dangerous weights to drop and no adjustments to make, just exact resistance. Founded in 2016, ARX is headquartered in Austin, Texas.