August 10, 2020 (Viz Release) - - The long-awaited treatise on Spygate is now available. White Hats, Swamp Creatures, and QAnon: A Who's Who of Spygate has been released. This voluminous expose by Captain Roy D. Captain Roy covers the complicated Spygate story in detail, helping readers follow the action with a playbook in hand. 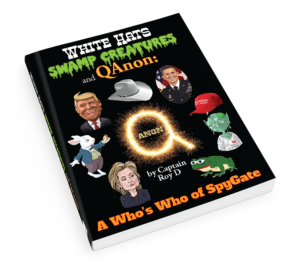 Relentlessly Creative Books LLC released this book before the 2020 election intensifies over the summer and fall. SpyGate, also known as ObamaGate and RussiaGate is a very complex news story with lots of players, each with a backstory.

White Hats, Swamp Creatures, and QAnon: A Who's Who of Spygate lists the various players by name along with information that brings readers up to date on Spygate. The book is a literal encyclopedia, organized alphabetically by name and fully indexed and cross-referenced. The author has been writing on this topic and other related topics for many years.

He is also a co-author of the #1 Amazon Bestseller: QAnon: An Invitation to the Great Awakening. Details on this book may be obtained by going to https://www.amazon.com/QAnon-Invitation-Great-Awakening-WWG1WGA/dp/1942790139.

The talking points of White Hats, Swamp Creatures, and QAnon: A Who's Who of Spygate cover the FISA abuses, the Trump-Russia false collusion narrative, John Ratcliffe's vow to release more declassified documents relating to General Flynn/SpyGate, and Special Prosecutor John Durham’s commitment to reveal criminal indictments related to ObamaGate. These indictments are sourced from the referrals of IG Horowitz and several Congressional committees and Senate hearings.

Late-breaking stories related to the book include Ron Johnson's Senate DHS committee hearing about the Obama/Biden dealings in Ukraine with energy giant Burisma Holdings and a judiciary lead by Lindsey Graham that is currently holding public hearings with over 50 Obama-era officials testifying under oath regarding their involvement and knowledge concerning  SpyGate/ObamaGate.

The timely release of this important book makes it a must-have for anyone interested in the intricacies of this topic and its relation to the future of politics in the United States.

For further information, reviews or to order today see the above URL.

Questions for the author may be submitted by email to books@relentlesslycreative.com