October 12, 2020 (Viz Release) – – Cermetek Microelectronics, INC is announcing receipt of an award (# 2020-33610-31947) from the USDA-NIFA for the commercialization of its LeafMon-S system. Field testing over the past four years of the prototype LeafMon system has proven it to be especially useful in aiding growers implementing precision irrigation practices for almonds, grapes, pistachios, and walnuts. The technology, originally developed at UC Davis’ Bio and Ag Engineering Department under the direction of Dr Shrinivasa Upadhyaya and licensed exclusively by Cermetek, has been demonstrated to provide precise metrics indicating the relative plant water status or health of crops on a real-time basis. This is accomplished by monitoring a live crop leaf thereby providing automated, closed loop feedback for irrigation control during the entire growing season. Although there are several methodologies currently available that provide indicators of plant status, none of these are non-evasive, real-time, on-line feedback systems as is the case for the LeafMon system. Funding from this grant will be used to incorporate various evolutionary modifications and performance enhancements to commercialize the LeafMon-S system as well as making it universal by including the industry standard SDI-12 interface protocol. These modifications and enhancements will allow the LeafMon-S system to connect to any commercially available data-logger, or more efficiently, to any number of on-line internet accessible communication systems such as Cermetek’s Aquamon System. 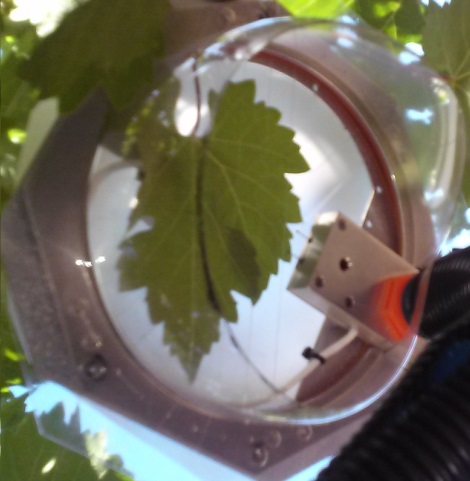 With the major droughts that we are facing in California and many parts of the world, the use of LeafMon technology can make a major difference in water conservation through precision irrigation in years to come. This technology can be particularly important during these drought years. LeafMon is much more effective and efficient and is not invasive, thus making it superior to other existing attempts at determining plant health and plant needs. Gone are the days of the farmer squeezing a bit of soil to determine soil moisture and plant needs.

To learn more about the LeafMon-S system, contact Cermetek at 408 942 2200 or via email at Sales@cermetek.com.