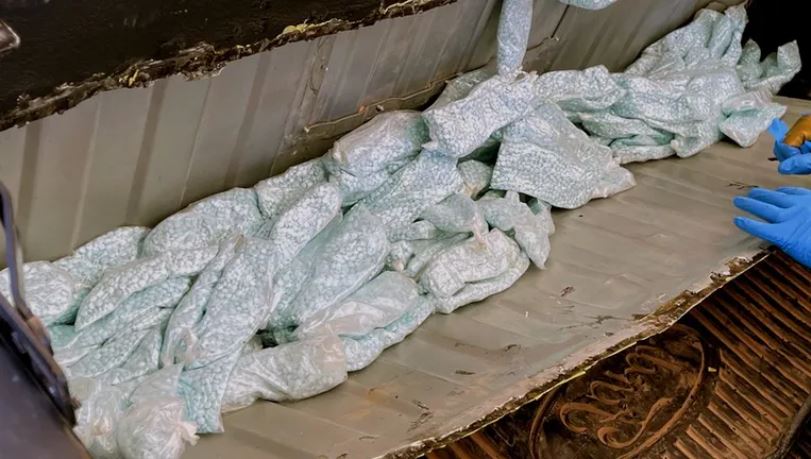 Border Patrol agents in the Tucson Sector discovered more than 50 pounds of pills containing suspected fentanyl hidden under the bed of a pickup this week, as seizures of the synthetic opioid continue to surge at the southwest border.
Taking just one pill containing the deadly substance can be fatal, and the U.S. Drug Enforcement Agency says 42% of the illicit pills tested for fentanyl contain at least 2 mg of the drug – considered to be a lethal dose.
BORDER CRISIS: VIDEO SHOWS SMUGGLER ABANDON 7-YEAR-OLD MIGRANT GIRLU.S. Customs and Border Protection reported they stopped a white F150 Monday morning at the Interstate 19 Immigration Checkpoint near Amado, Arizona, when a canine alerted agents to the truck.
Using the dog's nose and imaging technology, the agents uncovered a compartment hidden under the bed where the trove of 53 pounds of pills were found.
MOTHER WARNS OF FENTANYL DANGERS AFTER DAUGHTER DIES AMID SPIKE IN RELATED DEATHS AROUND USThe press release stated that the pills "tested positive for the characteristics of fentanyl."
Agents arrested the 33-year-old driver of the vehicle, described as a female U.S. citizen.
She was handed over to the DEA for prosecution.
Fentanyl is typically manufactured in Mexico, and cartels send the illicit drug across the border for distribution across the U.S. where opioid deaths have become a crisis.
CLICK HERE TO GET THE FOX NEWS APPOfficials have seized roughly 10,000 pounds of fentanyl at the southern border so far in fiscal year 2021, along with 180,000 pounds of meth, 86,000 pounds of cocaine, 5,000 pounds of heroin and 311,000 pounds of marijuana.
Fox News' Ashley Soriano contributed to this report.