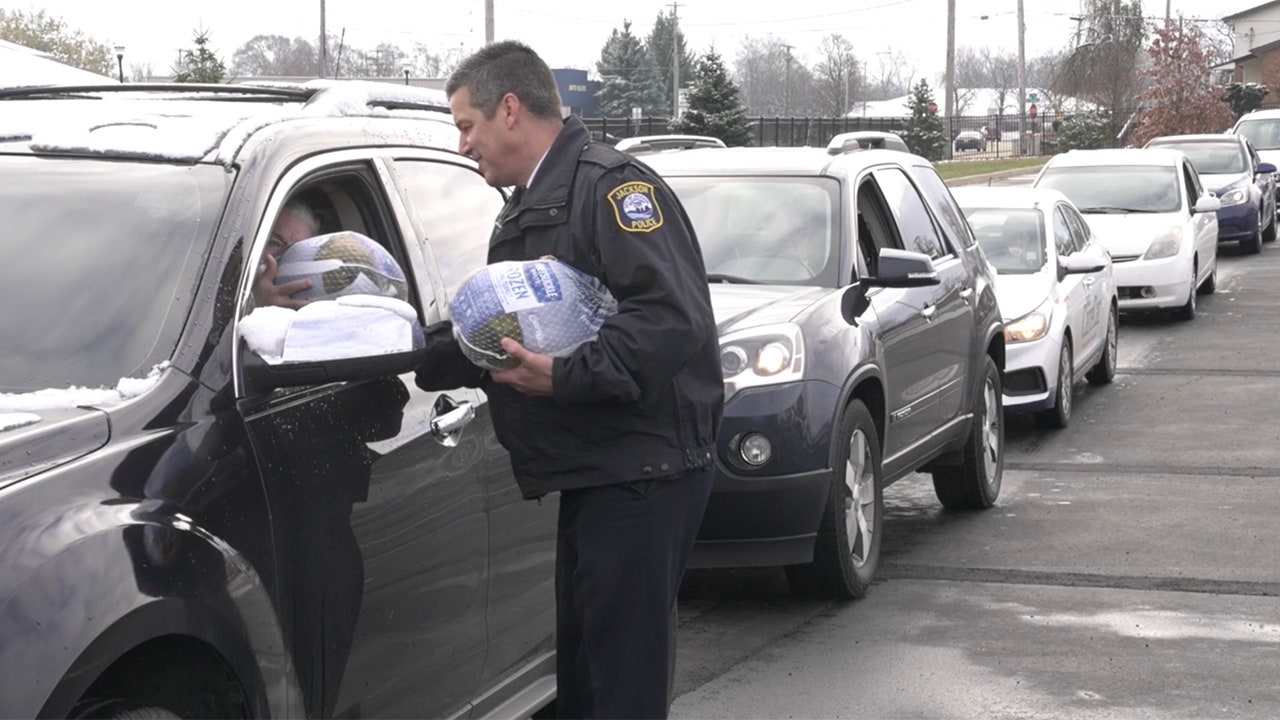 In honor of Thanksgiving 2022, law enforcement is helping residents complete their Thanksgiving dinner by handing out free turkeys.
With inflation impacting holiday feasts this year, officers at the Jackson Police Department in Michigan are doing what they can to help their community.
On Wednesday, Nov. 16, hundreds of individuals waited in line in hopes of receiving a free turkey for their Thanksgiving celebration.
HOW TO CARVE A THANKSGIVING TURKEY: 2 CHEFS SHARE THEIR SECRETS FOR A ‘BEAUTIFULLY CARVED’ BIRDOne hundred and fifty residents received Thanksgiving turkeys in the city's first ever turkey giveaway, Fox 47 WSYM reported.
We know the need is there and it’s not a lot but we tried to do what we could," Jackson's Group Violence Intervention Coordinator Cheryl Ragland told Fox 47.
HERE'S HOW TO SOLVE COMMON TURKEY ISSUESRagland continued, "150 turkeys went really fast but next [year] there will be more for sure."
Jackson resident Jaime Key told Fox 47, "I’m really thankful that they’re doing this."
Ragland told Fox 47 that this turkey giveaway aligns with the positive messaging for Jackson's Group Violence and Intervention program.
"With increasing food costs for families, we hope this will also alleviate some financial strain during the holiday season," Ragland told Fox 47.
More on @FOX61News all morning long pic.twitter.com/chMBsYNeXQ — Lindsey Kane (@lindseykanetv) November 23, 2022Jackson Police aren't the only ones giving back this holiday season.
This week, police officers in Windsor, Connecticut, cooked Thanksgiving meals to be delivered to dozens of people.
And in 2021, the Mesa Police Department in Mesa, Arizona, surprised drivers by pulling them over only to gift them frozen turkeys instead of tickets.
Source