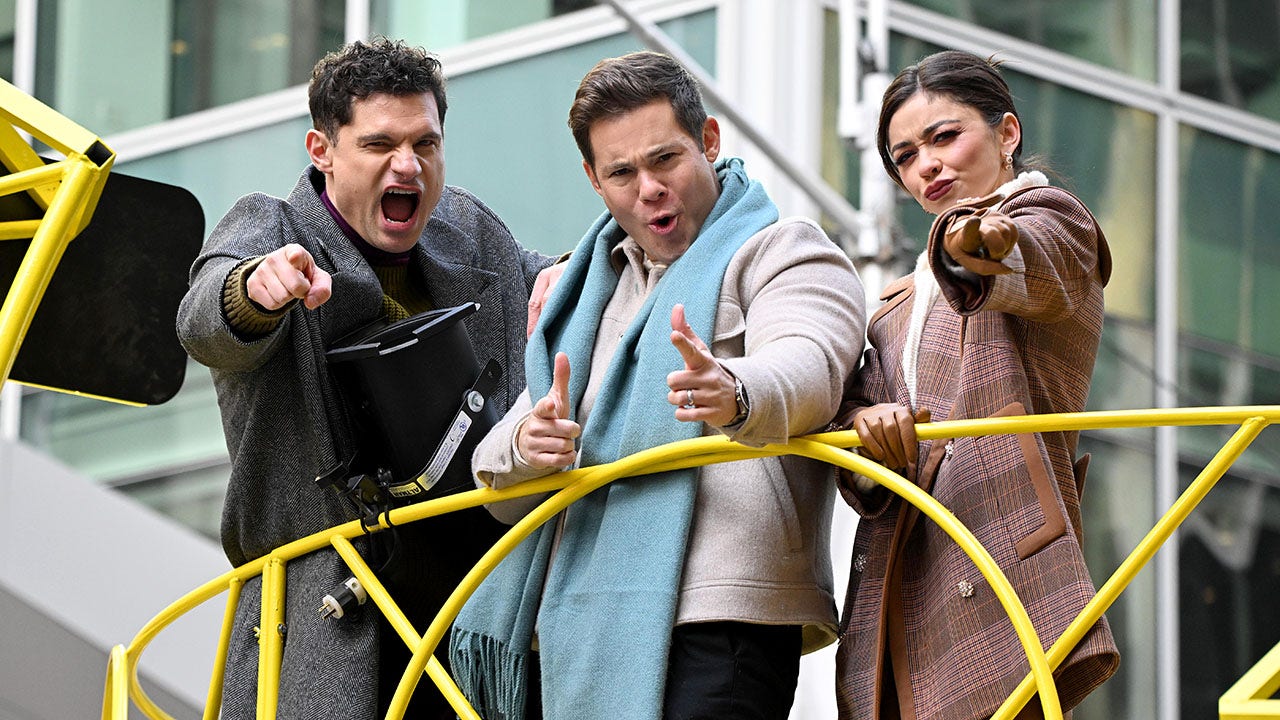 Sarah Hyland, of "Modern Family" fame, and "Workaholics" star Adam DeVine, kicked off their holidays by participating in Macy’s Thanksgiving Day Parade.
Ahead of their new musical-comedy series together, "Pitch Perfect: Bumper in Berlin," the pair hopped on the opportunity to sing on a large float with a gigantic peacock displayed on top.
Along with their costar and German actor, Flula Borg, the trio were seen rehearsing earlier this week for the performance.
SARAH HYLAND AND WELLS ADAMS ARE MARRIED IN CEREMONY ATTENDED BY HER 'MODERN FAMILY' CO-STARSAs the group was all smiles during the parade, they decided to sing an a cappella mash-up of NENA’s "99 Luftballoons" -- or "99 Red Balloons" -- and A-Ha’s classic hit, "Take On Me."
Hyland, DeVine, and Borg posed for the camera as they bundled up on the Thanksgiving Day Parade float.
DeVine donned a large light blue scarf with a beige jacket and black pants, while Borg wore a green sweater underneath a grey peacoat and burgundy pants.
ADAM DEVINE CLARIFIES HE'S NOT ADAM LEVINE: 'MY WIFE AND I ARE DOING GREAT'The "Love Island" host sported a brown tweed jacket, with a cozy white turtleneck sweater dress, along with sheer tights and chestnut-colored leather boots.
During their time on "Modern Family," Hyland portrayed Haley Dunphy – the popular, yet at times, aloof daughter of the hit show, and DeVine’s character was an ambitious nanny.
JULIE BOWEN SAYS DESPITE IDENTIFYING AS ‘STRAIGHT,’ SHE WAS ONCE IN LOVE WITH A WOMANOn the hit show, the two formed a shocking friendship, which eventually led to a romance.
"It was so much fun being back together," Hyland said during an interview with Entertainment Tonight.
CLICK HERE TO SIGN UP FOR THE ENTERTAINMENT NEWSLETTER"When I was given this opportunity to work with Adam again, I just jumped at it because we love each other."
CLICK HERE TO GET THE FOX NEWS APPHyland reportedly got denied a part in "Pitch Perfect 2," due to her height.
Source