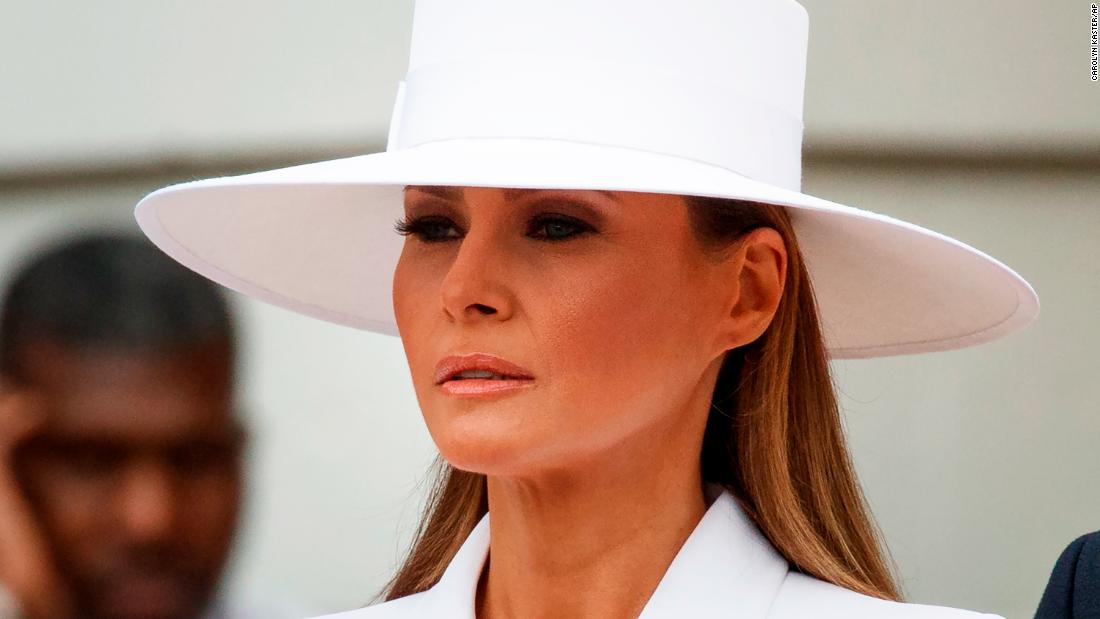 CNN reached out to Melania Trump for comment and did not receive a response.
Trump is auctioning the white, wide-brimmed, crepe hat she wore in April 2018 , for the state visit of French President Emmanuel Macron to the White House.
The hat, created by Trump's personal stylist, the designer Hervé Pierre, was made to match the white Michael Kors Collection suit she wore for the occasion; the suit was off-the-rack, the hat was bespoke.
In addition to the hat, Trump has included a watercolor of her face in profile, wearing the hat -- what her website calls "The Head of State Collection" -- and a non-fungible-token (NFT) of the watercolor, with some animation.
Bidding on the current auction -- with the hat, the watercolor and the NFT -- closes January 25, according to Trump's website.
All of the items Trump is selling can only be purchased via cryptocurrency.
one former close friend of Trump's, who spoke to CNN under the condition of anonymity in order to speak freely without retribution, said.
"It is not okay," said another person who worked in a senior position in the Trump White House.
JUST WATCHED Melania's most talked about outfits Replay More Videos ... MUST WATCH Melania's most talked about outfits 01:41The LBJ library includes a section dedicated to former first lady Lady Bird Johnson, which includes several important artifacts and a good selection of her clothing.
Melania Trump dabbled in a brand of her own, in 2010 designing and selling "Melania Trump" fashion jewelry and watches on QVC.
"I don't know why everyone is so surprised by this," one former Trump administration official and current Trump supporter told CNN of her endeavor.
The impetus for Trump's decision to auction a personal item of clothing might never be known.
Source