'Kansas will not be our last fight': Abortion rights victory gives Democrats new hope for midterms 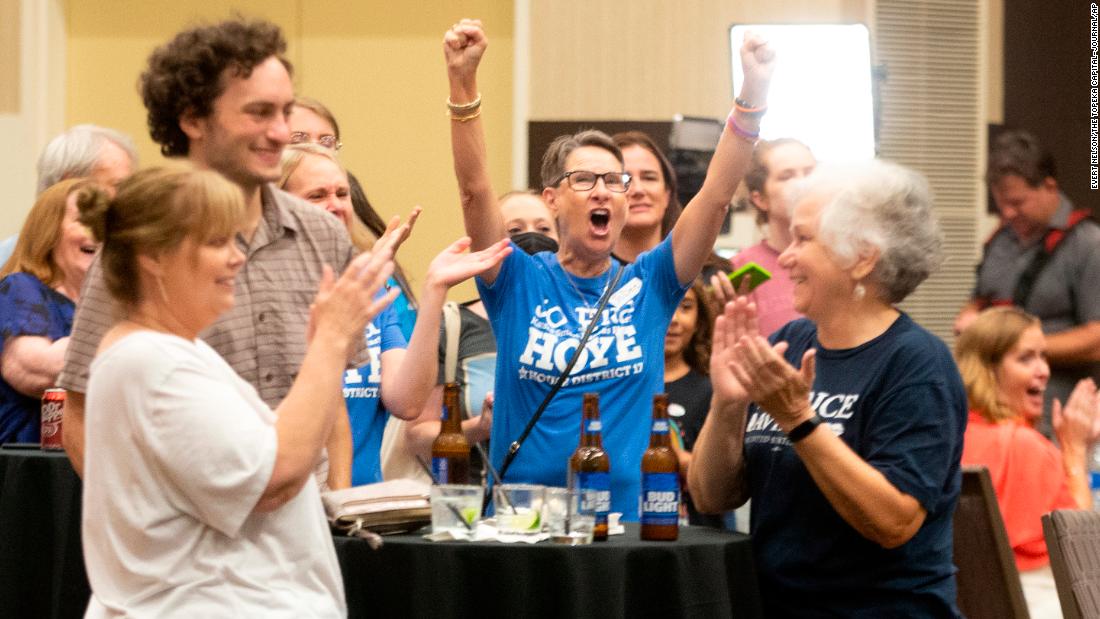 (CNN) It isn't often that Democrats look to deep-red Kansas for resounding affirmation.
But on Tuesday night, when Kansans overwhelmingly voted to keep protections for abortion rights in their state constitution, that is exactly what happened.
"We know that Kansas will not be our last fight, or our last victory."
Democratic and Republican operatives acknowledged Wednesday that the result in Kansas, while limited to one state, could shift the way each party approaches the midterms.
Democrats, buoyed by polling and the Kansas result, will likely attempt to make abortion a top issue in key races, hoping to link their Republican opponents to the support for stricter abortion laws.
The results across the country on Tuesday, however, also highlighted a complicated relationship between voters and abortion.
While Kansas voters resoundingly rejected the abortion amendment, Republican primary voters in places such as Arizona Michigan and Missouri also nominated candidates for governor, US senator and other top positions who support enacting stricter abortion restrictions.
Some Republicans also believe a focus on abortion would allow Republicans to go on offense against Democrats who oppose limits on the procedure.
Polls show Roe decision is broadly unpopularPolls have consistently shown that the Supreme Court's decision to overturn Roe v. Wade is broadly unpopular and that a majority of Americans support protecting abortion rights.
"This is further proof of what poll after poll has told us: Americans support abortion rights.
They believe we should be able to make our own health care decisions, and they will vote accordingly, even in the face of misleading campaigns," said Christina Reynolds, a top operative at EMILY's List, which backs female Democrats who support abortion rights.
"Republicans want to take this right away from Americans, and Democrats want to guarantee this freedom and the freedom to control your own body," she said.
Source