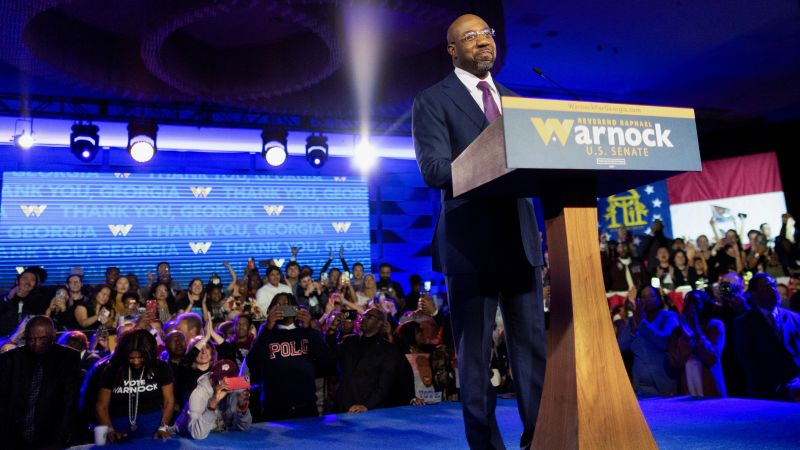 Since November 2020, Warnock has been the leading vote-getter in four consecutive Georgia Senate elections.
But because of state law requiring statewide candidates to get a majority to win a general election, Warnock had to double the feat in both his 2020 special election and his 2022 bid for a full six-year term.
As the 2022 midterm cycle spins to its end, here are five takeaways from this final election night in Georgia.
But winning a 51st seat, thanks to Warnock’s victory Tuesday, comes with important benefits for the Democrats running the Senate and for President Joe Biden’s administration.
That outright majority means that Democrats will have the majority on committees, allowing them to advance Biden’s nominees more easily.
For example: The Senate Judiciary Committee, with its 22 members, will shift from a split of 11 Democrats and 11 Republicans to 12 Democrats and 10 Republicans.
But with Trump up for reelection, Democrats won the presidency in 2020 and both of the state’s Senate seats in 2021 runoffs.
Then, this year, they won a Senate seat again, defeating a candidate pushed into the race by the former president.
After his victory, though, Kemp more fully embraced his party’s Senate nominee, despite the governor’s bad blood with Trump.
Kemp’s goal was to convince some of those tens of thousands of ticket-splitters to support the GOP nominee in the runoff.
However, Georgia’s runoff proved a lesson that former President Barack Obama and, later, Trump, had to learn: Voters’ support often isn’t transferrable.
And without Kemp on the ballot, many of the same moderate suburbanites who rejected Walker in November did so again in the runoff.
Source