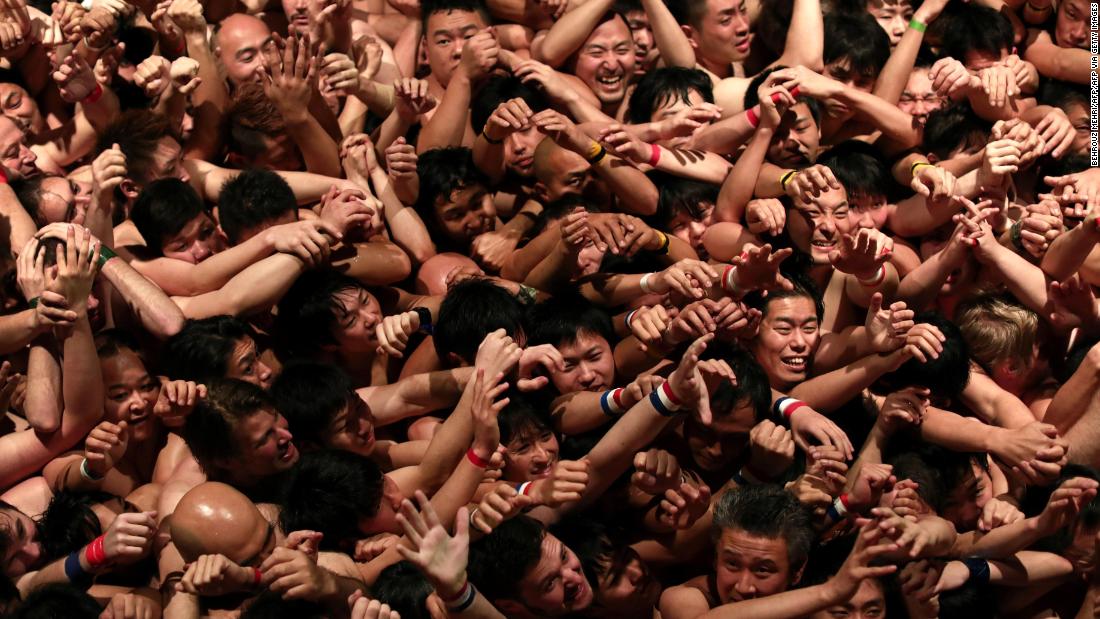 (CNN) — This time a year ago, thousands gathered for Japan's annual Hadaka Matsuri -- also popularly known as the "Naked Festival"-- in Okayama prefecture in the southern part of Honshu island.
Also known as Saidaiji Eyo, Hadaka Matsuri takes place on the third Saturday of February at the Saidaiji Kannonin Temple, about a 30-minute train ride from Okayama city.
But the Covid-19 pandemic has cast its long shadow over 2021 proceedings, forcing organizers to pare things down significantly.
A battle between 10,000 menHadaka Matsuri celebrates the blessings of a bountiful harvest, prosperity and fertility.
In normal times, it starts mid-afternoon with an event for young boys -- aimed at fostering interest in younger generations.
They sport a minimal amount of clothing; usually a Japanese loincloth called a "fundoshi" and a pair of white socks called "tabi."
In this picture taken on February 18, 2017, worshippers wait for the priest to throw the sacred batons during the annual Hadaka Matsuri at Saidaiji Temple in Okayama.
But event organizers confirmed to CNN Travel that this year's Hadaka Matsuri event, which took place on February 20, was limited to only a select, socially distanced group of 100 or so men who had caught the shingi in past years, and was closed to spectators.
Uninterrupted for 500 yearsAs part of the Naked Festival, participants purify themselves with freezing cold water before entering the main temple.
In a statement highlighting their reasons for going ahead with a severely downsized version of the festival, organizers noted that it's has continued uninterrupted for over 500 years.
The Naked Festival evolved from a ritual that started 500 years ago during the Muromachi Period (1338-1573), when villagers competed to grab paper talismans, which were given out by a priest at the Saidaiji Kannonin Temple.
The pandemic forced organizers to postpone the Tokyo 2020 Summer Olympics last year, with the games set to begin on July 23, 2021.
Source