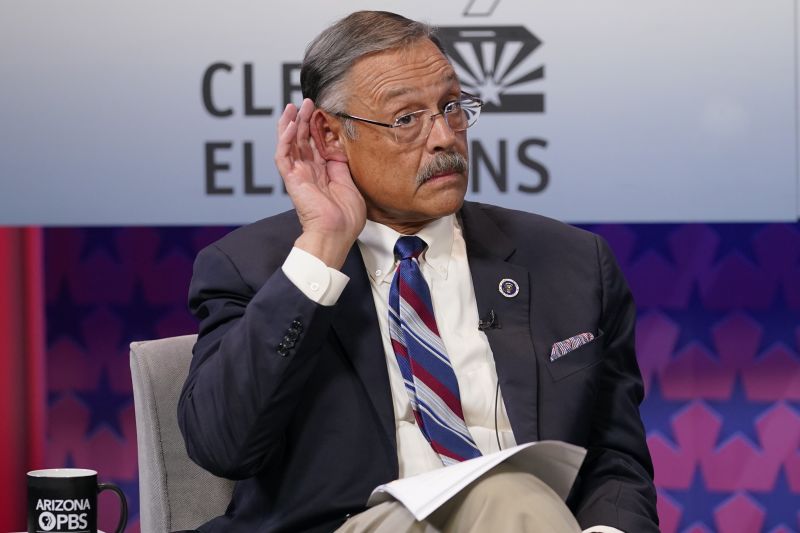 CNN —Arizona Republican secretary of state nominee Mark Finchem doubled down on the conspiracy theories that he has espoused about the 2020 presidential election in a debate against Democrat Adrian Fontes Thursday night, asserting that the votes in several key Arizona counties should have been “set aside” even though there was no evidence of widespread voter fraud in the 2020 contest.
“There are certain counties that should have been set aside as irredeemably compromised – Maricopa County was one of them.
Trump is supporting a broad array of election deniers vying for office in November as he continues his unrelenting campaign to undermine and subvert the 2020 results.
Mark Finchem, Republican candidate for secretary of state, attends a debate sponsored by the Arizona Clean Elections Commission at the Arizona PBS studios at the Walter Cronkite School of Journalism and Mass Communication at Arizona State University in Phoenix on September 22, 2022.
“Our democracy really rests on the decisions (of) thousands of people – Republicans and Democrats alike – who did the work of elections.
The office he is seeking is also critically important in another respect because in Arizona, the secretary of state is second in line to the governorship.
Finchem co-sponsored legislation with fellow Republican lawmakers in Arizona that would allow lawmakers to reject election results and require election workers to hand-count ballots instead of using electronic equipment to tabulate results.
He has also asserted without evidence that early voting leads to election fraud and has questioned whether it is constitutional.
Finchem resisted, arguing that the secretary of state does not set policy: “The secretary of state doesn’t eliminate people’s ability to vote.
Fontes also pressed Finchem to explain what he was doing in Washington, DC, on January 6, 2021.
Fontes has just engaged in total fiction, the creation of something that did not exist,” he said.
… For him to assert I was part of a criminal uprising is absurd and frankly, it is a lie.”
Source