Maggie Flanigan Studio, an acting studio based in New York, NY, has revealed that Whitley Cargill was interviewed about her experience, attending one of the best summer acting programs New York has to offer. She had attended the six-week summer acting program offered by Maggie Flanigan Studio and in the interview, she discussed the difference between university level acting classes and the professional acting training that she experienced in the acting studio.

She noted that in her experience studying theater in a university, there was so much memorizing and she was surprised about the amount of emotions that she was required to express when training in the acting studio. She said in the university, there was too much repetition and they were just learning lines. In contrast, when she went to the Maggie Flanigan Studio, she was able to find the emotional need that she was looking for that she had to express as an actor.

She was surprised that in the summer acting program, she had to do a lot of crying, screaming, yelling, and expressing every kind of emotion in front of the class, when usually she would do those things just in her bedroom or in front of a close friend. She pointed out that it was a new experience for her to express her emotions in front of people she hardly knew and allowed her to get in touch with a deeper part of herself.

She noted that the summer acting program at Maggie Flanigan Studio is one of the best summer acting programs for college students in New York. She observed that it didn’t change her as a person, but many things had changed for her professionally, in her acting and in learning how to work with various people. Professionally, she realized that the most significant change in her is becoming more comfortable crying in front of strangers. 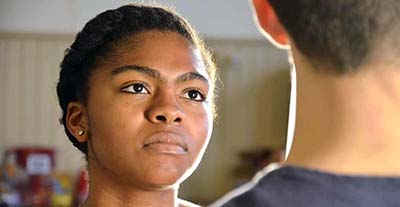 It was her first time to experience the Meisner Technique and she believes it is one of the best and she is really happy to have learned it during the summer acting program. She pointed out that coming to the studio can very stressful, which is why students need to know meditation or a way to calm themselves down. She advises other students to develop that inner voice that will help calm them down and reassure themselves. She also points out that it is necessary to stay in touch with friends and family and those with whom they often socialize with to maintain and have their support. She also advises upcoming students of the acting program to try and talk with the other students in the class because they are likely to be undergoing the same experience.

When asked about Charlie Sandman as a teacher, she believes that he is a great teacher who won’t tolerate anything and is always honest with each student. Although some may think that he is too harsh and critical, she appreciates his attitude because it helped her to grow and learn from her mistakes.

And when asked what she would advise a fellow actor who is looking a serious acting program, she said that she would tell that person to, “Come here to study because you're not going to waste your time, you're going to learn. Even though you don't have class every day, you still have to commit.”

When asked what she felt about going back to school, she said that she has realized that universities that teach theater simply provide a broad knowledge of theater and a little bit of acting. She realizes that she will be training for the remainder of her life although she felt that she had progressed a lot while attending the summer acting program.

Those who say they are looking for an effective “summer acting program near me” may want to check out the Maggie Flanigan Studio website, or contact them on the telephone, or through email.