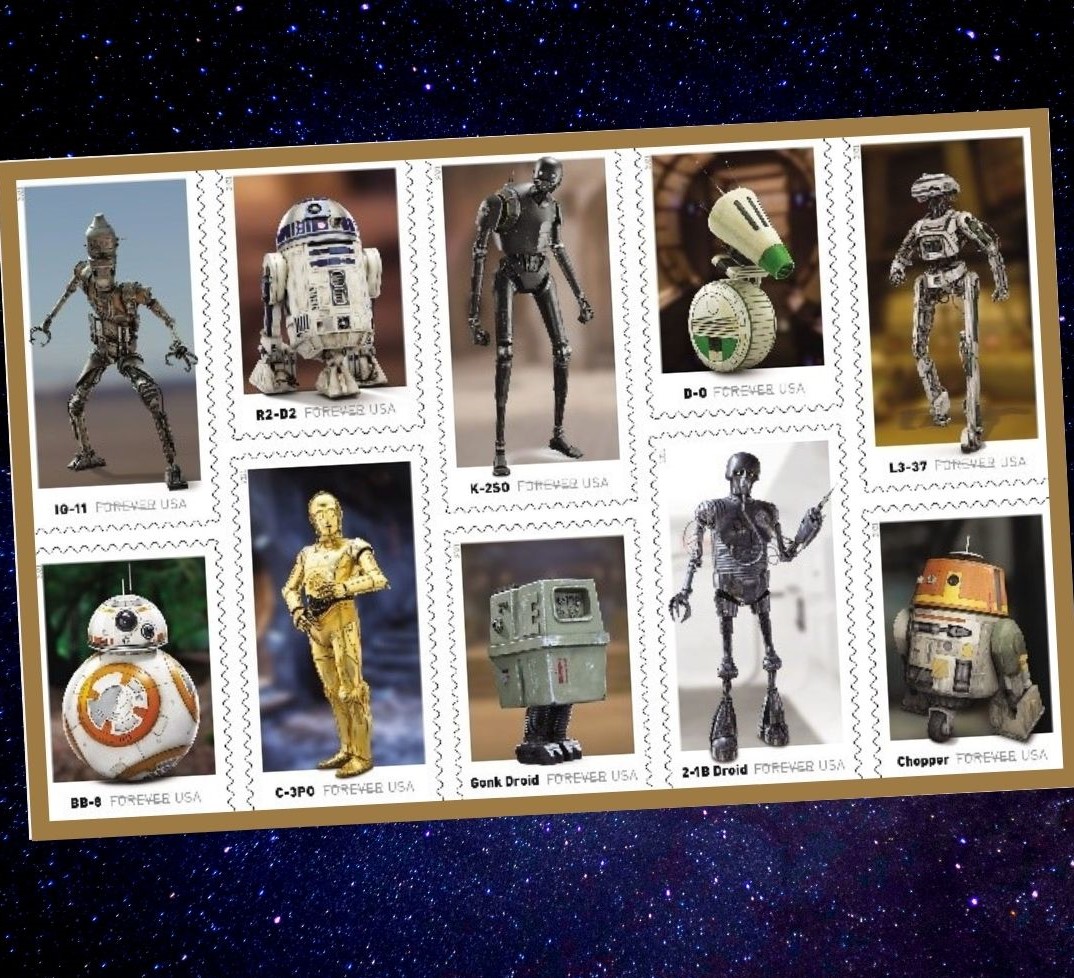 Naperville, IL – In the wake of their 50th anniversary, the United States Postal Service (USPS) is celebrating the first installment of the Star Wars franchise, “Star Wars: A New Hope”. The Boxes Etc., a Naperville packing and shipping store, is excited to announce a new line of Forever stamps in honor of the Star Wars anniversary.

The 10 collectible stamps will feature the most popular droids from the Star Wars universe including R2-D2 and C-3PO, as well as some of the lesser-known droids like D-O from Rogue One. A complete list of characters includes C-3PO, R2-D2, BB-8, IG-11, K-2SO, L3-37, D-O, the GNK (Gonk) power droid, C1-10P (Chopper), and a 2-1B surgical droid. The set of droids are said to be a nod to the film and television production company, Lucasfilm, as well as its parent company, Disney’s, contributions to science, technology, engineering, and math (STEM) education, and the continued collaboration between “Star Wars: Force for Change” and global pre-K-12 nonprofit organization “FIRST” (For Inspiration and Recognition of Science and Technology).

While the collection will not include some of the better known Star Wars Jedis or Storm Troopers at this time, the different backgrounds pay tribute to settings of some of the most memorable adventures from the movies, including blurred-out stills from the desert planet Tatooine and a passageway from the floating Cloud City.  The new stamps will cost $0.55 each, or $11.00 for a roll of 20. Additional details about the new collection, including the release date, will be announced later this year.

The Boxes Etc. provides a number of services such as shipping, mailbox rental, business supplies, and more. As an authorized shipping center for FedEx, the USPS, UPS, and DHL, the team of professionally trained shipping experts can pack and ship almost anything to almost anywhere. The Boxes Etc. stands out against their competition by providing personalized service and competitive shipping alternatives.

For more information about The Boxes Etc. or their services, give them a call at (630) 717-1351 or visit their website at www.theboxesetc.com.

For more information about The Boxes Etc., contact the company here: