Costa Mesa, CA - 2020 will be known as the year COVID-19 changed the world but it’s also the year in which a massive surge in drug overdose deaths took the US by storm. The US Centers for Disease Control (CDC) reported a staggering 93,331 drug overdose deaths in 2020, a 29.4 percent increase from the previous year. Click the link for information on "STATES HARDEST HIT BY PRESCRIPTION DRUG ABUSE IN THE U.S."

Overdose fatalities in the US are largely driven by the highly potent synthetic opioid fentanyl, which is frequently added to illicit drugs sold on the street. A recent flood of fentanyl-laced counterfeit prescription drugs has caused a surge in black market fake pills made to look like Xanax, Ativan, Vicodin, Percocet, morphine, codeine, and more.

Data collected by national agencies including the CDC, SAMSHA, DEA, U.S. Department of Education, and more reveal the states hardest hit by prescription drug abuse and the opioid crisis. The states with the highest percentage of illicit drug use by teens were, in order, Vermont, Maine, Montana, New Mexico, and Colorado. Roughly 13.92 percent of teens in Vermont used illicit drugs in the last month, which is 2.3 times higher than the lowest state, Utah.

Vermont also had the highest number of people who reported using illicit drugs in the past-month, at 20.82 percent. In order, the highest percentage of past-month drug use for adults based on states was Vermont, Oregon, Washington, Colorado, and Alaska.

Specific counties that saw the worst opioid overdose rates include Orange County in California. Seven out of ten drug-related deaths in Orange County were caused by prescription opioids.

The deaths caused by opioids in 2020 accounted for 75 percent of all drug overdose deaths, showing the true toll of the opioid crisis in the US. Most states saw an increase of roughly 30 percent in their opioid overdose death rates, but Colorado saw a shocking 54 percent increase in opioid-related deaths.

Across the country, thousands of people suffering from substance use disorder did not have their addiction treatment needs met. The states with the highest unmet need for drug addiction treatment were, in order, Colorado, The District of Columbia, Nevada, and California.

Resurgence Behavioral Health, a leading addiction treatment center with locations in California, Texas and Tennessee, urges anyone in need of prescription drug rehab to reach out for help. Through the comprehensive personalized treatment programs available at Resurgence, prescription drug addiction can be overcome once and for all.

To speak with a treatment specialist anytime, day or night, call (855) 458-0050 or visit www.resurgencebehavioralhealth.com to learn more. 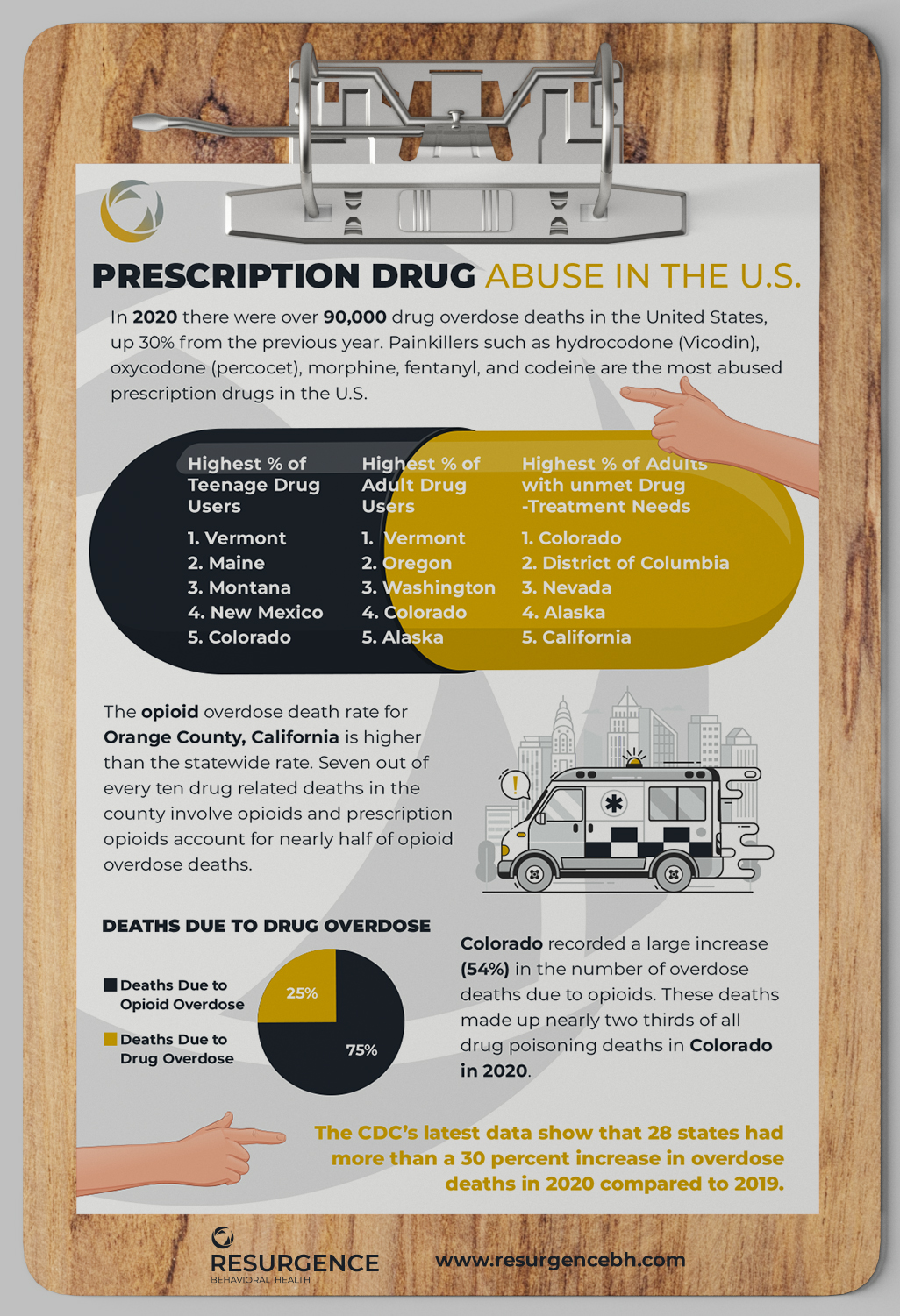