Springfield, MO – Ryan Frazier, a sexual assault attorney at the law firm Monsees & Mayer, P.C., was recently announced as the new Abuse Guardian for Springfield, Missouri by AbuseGuardian.com. He will be offering legal consultations and services to victims and survivors of sexual abuse. For more detail, visit: https://abuseguardian.com/sexual-assault-lawyer/springfield-mo/

This month, the national alliance of sexual abuse lawyers announced that they had added sexual abuse attorney Ryan Frazier, Esq. to their network of assault attorneys. When asked why they chose Frazier as their next Abuse Guardian, primary sponsor Brian Kent, Esq. went on to explain their selection criteria. “AbuseGuardian.com holds our sex abuse attorneys to a high standard. Our evaluation examines the lawyer’s years of experience in the field of sexual abuse, the number of cases they’ve handled in this area, the number of large settlements and verdicts that have been reported, the publications that have been published by the lawyers at the law firm, client’s reviews about the firm, the awards the law firm has won, the lawyer’s community involvement, and the specific industry organizations that the lawyer is a part of.” 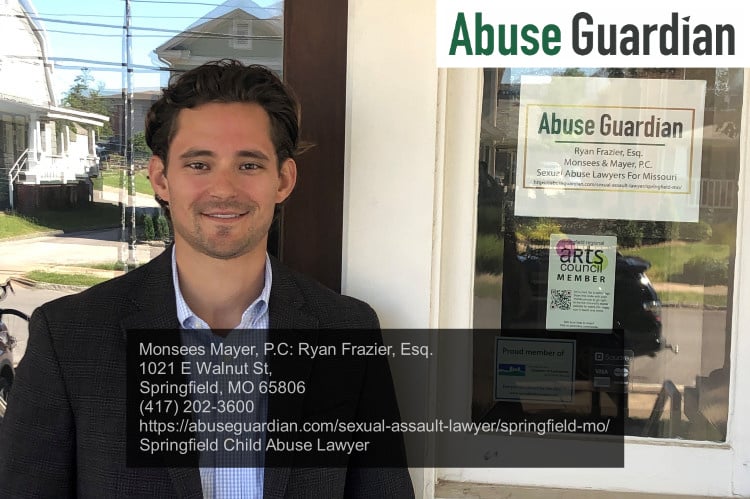 “Attorney Ryan Frazier has met all of these criteria and more. We are happy that he will be representing AbuseGuardian.com in Springfield, Missouri,” Kent, Esq. went on to say. Ryan Frazier, Esq. has been handling sexual abuse litigations for many years at out of his law firm’s office at 1021 E Walnut St, Springfield, MO 65806. Frazier is a native of the Springfield area and is passionate about assisting local residents in finding justice.