Overbites and Crossbites in Children Corrected with Interceptive Orthodontics

“Interceptive orthodontics means providing treatment to children as early as at age 7,” said Dr. Ryan Redford. “The goal is to fix problems that are developing earlier rather than later. Because the mouths and jaws of children are still developing, orthodontists can achieve results that are sometimes not possible with older teens and adults.” 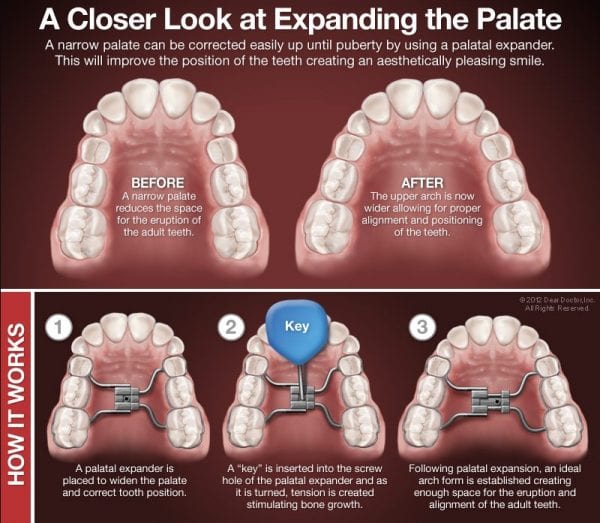 Two bite problems are common in children and adolescents: overbites and crossbites. Both are types of malocclusions, which is the medical term for a bite problem.

An overbite in kids is quite common. It is estimated that almost 70% of children have some type of overbite. Although some overbites improve on their own as a child grows, many require orthodontic treatment.

An overbite is when the top teeth overlap the bottom teeth by 3 millimeters or more. This type of malocclusion can cause numerous problems if left untreated. Potential issues include trauma to upper front teeth, damage to palatal soft tissue, speech impediments, social concerns with appearance, and difficulty chewing or eating.

“Overbite correction devices called the Herbst Appliance and the Carriere Distalizer provide excellent outcomes,” said Dr. Redford. Braces or Invisalign are used in conjunction with these devices and can also be used as a standalone to correct mild overbites. Ideal timing for overbite correction is when a child is experiencing their pubertal growth spurt.

A crossbite is another type of problem that can benefit from interceptive orthodontics. Crossbites happen when the upper and lower teeth or jaws are mismatched. There are two types of crossbites: anterior crossbites and posterior crossbites.

It is estimated that up to 22% of the population has some form of crossbite. Left untreated, this bite problem can cause shifting of the jaw when biting down, excessive, or uneven tooth wear, facial asymmetry, and difficulty with chewing or eating.

“Because the jaws of younger children are still growing and developing, orthodontists can use devices called a palatal expander to widen the jaw,” said Dr. Redford. As a result, the teeth and jaws come into alignment, although braces or clear aligners are usually still needed to fine tune the bite.

In younger children, it is also possible to prevent orthodontic problems when the cause of the malocclusion is behavioral rather than genetic or skeletal. For example, thumb and finger sucking can cause bite and tooth position problems.

The American Association of Orthodontists recommends that all children visit an orthodontist by the age of 7. This allows for developing problems and behaviors to be assessed and corrected with interceptive orthodontics—preventing more invasive and expensive treatment later in life. For example, a young child with a developing crossbite may require simple treatment with an expander for few months, whereas an adult with a crossbite may end up needing invasive jaw surgery to achieve the same result.

Parents looking for an orthodontist for their child or teen in Riverside County, CA, can contact Burke & Redford Orthodontists directly for a free orthodontic consultation at either the Temecula or Lake Elsinore offices.