Oakland County DUI accident lawyer Paul J. Tafelski releases a new article (https://www.michigandefenselaw.com/accident-dui.html) explaining what an accident DUI is in the state of Michigan. The lawyer mentions that DUI is taken very seriously in Michigan. If a person is involved in a DUI accident, it’s not usually that they are pulled over by police. Law enforcement may be called to the scene of the accident instead.

“An accident drunk driving case occurs following an investigation of the accident scene. Sometimes the driver only injures him or herself. However, an accident DUI may involve catastrophic injuries or even death to someone else. In serious cases involving death or catastrophic injury, it is often important to seek defense around fault for the accident or causation factors,” says the Oakland County DUI accident lawyer. 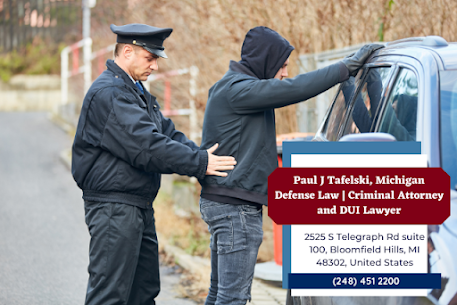 The lawyer explains that if a person is involved in a crash while under the influence, they may be facing significant penalties and even prison time. One example charge can be the offense of Operating While Intoxicated Causing Serious Injury. This offense may be punishable by up to five years in jail and a fine of $1000-$5000.

Attorney Paul J. Tafelski adds that in the event that someone is killed in the accident, the maximum penalty is 15 years in prison and a fine of $2500-$10,000. The lawyer mentions that it is very important to consult a criminal defense attorney when facing charges related to a DUI accident. There may be small details in the case that can make a big impact on the final outcome.

In the article, attorney Tafelski says that there are many instances where the defendant accused of drunk driving may flee the scene. This can sometimes be caused by fear, shock, injury, or an attempt to avoid being caught. The lawyer adds that it is very important for someone accused to not make any statements to the police without seeking the guidance of a lawyer.

According to the DUI lawyer, “You should not lose heart and assume that a conviction will occur simply because there was an accident associated with your DUI. There are various strategies that we may be able to employ to defend you. For instance, in some cases, the cause of the accident, meaning who was at fault, can be contested. Even if a person was guilty of drunk driving, they may not be guilty of the more serious offenses related to injury or death if the cause of the accident or injury can be effectively challenged.”

Lastly, the lawyer emphasizes the importance of having a skilled lawyer when facing charges of DUI. An experienced lawyer may be able to help the defendant understand their rights and protect their freedom.