Hardik Soni from NJ Center for CoolSculpting says, “Thanks to CoolSculpting, there is no reason to live with bulges of fat on your arms. In 35 to 60 minutes, you will notice a significant difference, which will continue to improve over the next few months. The number of treatments required to achieve optimum results depends on the volume of fat.” 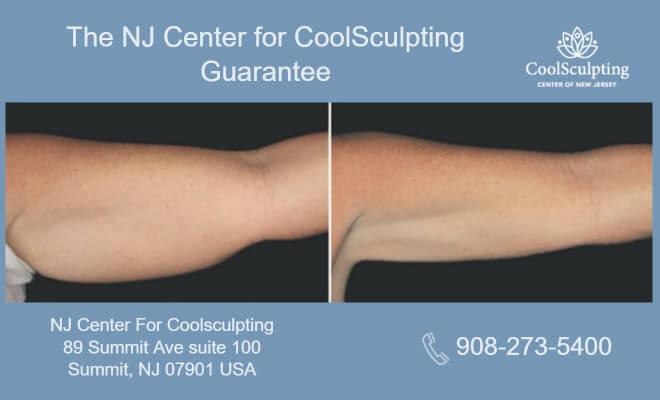 He continues, “For most people, one CoolSculpting treatment will eliminate 20 to 25 percent of body fat on the target area. Although you would see a drastic improvement from one treatment, to reduce fat by 50 percent or more, you can always have follow-up procedures performed. When going through the physician consultation, you will get a much better idea as to the actual number of treatments that you would need on your arms.”

One of the many benefits from CoolSculpting for arms is that there is only a minor amount of discomfort during the procedure. Patients will only notice a slight sensation of aching, tingling, or pinching, which will last only for a few minutes. Once the cooling effect has set in, the patient will no longer feel anything. It has been observed that only 10 percent of patients report pain, which is usually short lasting and minimal.

The controlled cold treatment works by lowering the temperature of the fat cells in the target area, with the result that they release the fat inside. The released fat metabolizes over days and weeks and then they get excreted from the body naturally. The fat cells in the arms will then shrink, providing the upper arms a more sculpted and thinner appearance.

However, they want to point out that CoolSculpting will not tighten saggy skin on the arms. This will require skin-tightening procedures like an arm lift or ultrasound. In the arm lift, the excess skin will have to be removed through surgery. For the back of the arms of any other part of the arms with extra fat, CoolSculpting can help. And depending on the volume of the fat cells, more than one session may be required.

Another area of the body where CoolSculpting can work well is the stomach. It offers a non-invasive alternative to the tummy tuck. A CoolSculpting treatment usually requires only 35 to 60 minutes while a tummy tuck will take between one to three hours to complete. For those who have an excessive amount of sagging and loose skin, a tummy tuck may be required to get rid of the excess skin. On the other hand, CoolSculpting is a holistic treatment that focuses on bulges of fat on the stomach and other areas of the body.

Another target area for CoolSculpting is the thighs, where the physician will put a gel pad and applicator on the problem area of the thighs. The controlled cold passes through the applicator and targets and kills the fat cells. These fat cells will then die through apoptosis. Some will not die immediately but will die over weeks and months. This is desirable to prevent the body from becoming overloaded with too many dead and dying cells. The dead fat cells get processed by the body and then excreted.

CoolSculpting may also be used on the breasts, for both women and men. It will not reduce the breast size but it will get rid of fat cells, allowing the breasts to appear somewhat smaller and smoother.

For more information about NJ Center for CoolSculpting, contact the company here: