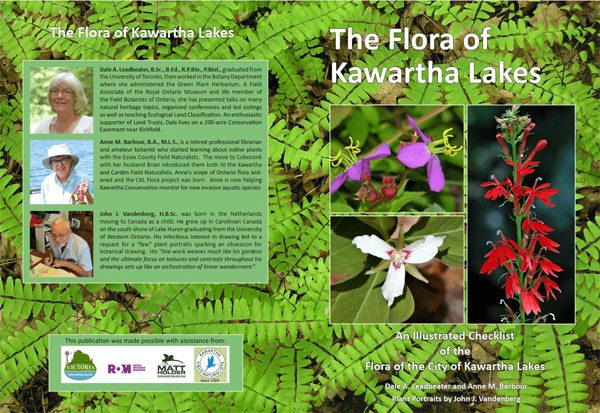 The Kawartha Field Naturalists based in Fenelon Falls, ON, Canada, is happy to announce the launch of the book, "The Flora of Kawartha Lakes: An Illustrated Checklist of the Flora of the City of Kawartha Lakes", by Dale A. Leadbeater and Anne M. Barbour, with plant portraits by John J. Vandenberg. This book, the result of the KFN’s City of Kawartha Lakes (CKL) flora project, provides a fully researched list of all documented plant species, present and historical, in CKL, their status in the province and in CKL. The introductory chapters present an historical and geographical discussion that connects the plants to the land, setting this book apart as unique in the genre of natural history. The Flora covers such diverse habitats as the shield wetlands harbouring Atlantic Coastal Plain species through cattle country on the alvar, over rolling hills to the Oak Ridges and Dummer Moraines and the people that live there. A matrix listing all plant records geographically by townships as of 2021 provides insight into those plants with fidelity to unique habitats such as the Canadian Shield as opposed to those more widely spread and the text discusses their sensitivity to climate change and on-going human occupation. Spiral bound and 216 pages, it contains 150 photographs and original plant portraits created for the book.

The authors met in mid-2000’s after making Coboconk in CKL their homes: a 200-acre conservation easement on the Talbot River and Balsam Lake waterfront respectively. Dale is a professional ecologist, and former administrator of the Green Plant Herbarium in the Botany Department of the University of Toronto. She is a field associate for the Royal Ontario Museum, a life member of the Field Botanists of Ontario and a well-known contributor to natural history programmes.

Anne is a retired professional librarian and earned her botanical skills with the Essex County Field Naturalists, and later the Kawartha and Carden Field Naturalists. She has a long history of volunteer positions with KFN and is currently assisting Kawartha Conservation in monitoring new invasive aquatic species.

John, a well loved former high school teacher in Port Perry, created the amazing botanically-correct portraits that grace the Flora. His portfolio, consisting of nearly 1000 botanical portraits, is being donated to the Royal Ontario Museum in Toronto.

Other Kawartha Field Naturalists projects include management of the Altberg Nature Reserve (AWSNR), the largest of the Protected and Conserved Areas owned by Ontario Nature. It is composed of 470 hectares (1163 acres) of highly diverse wetland and woodland in central Ontario due to its topographic variability and to its location on the contact between the granitic rocks of the Canadian Shield and the limestone of the Great Lakes – St. Lawrence forest.

The Kawartha Field Naturalists are also official stewards of a huge wetland complex sprawling up the valleys of two creeks. It was also donated by Rudolph Altberg and is one of the provincially significant wetlands that is highlighted through a cooperative program between the City and KFN – see page 49 of the Flora.

Founded in 1984, the Kawartha Field Naturalists is a club of nature lovers in the City of Kawartha Lakes. Club members have participated in a variety of events relating to nature over the years, such as the Winter Frolic; selling of bird feeders and boxes; participation in the Fenelon Falls Christmas Parade; distributing nature information at the Lindsay Fair; initiation of a trail of Bluebird nest boxes across several townships, that became the “Bill Watts Bluebird Trail”; recycling of metal cans in Fenelon Falls; promoting rezoning of a natural area near the Langton Public School; creation of “The Barbara Arnup Memorial Fund” to provide funds for education about birds and sponsorship of a local high school student for the Ontario Nature Youth Summit. The club participates in the Christmas Bird Count, the Baillie Birdathon and the Carden Challenge, raising funds for conservation. Kawartha Field Naturalists have been awarded the W.W.H Gunn Conservation Award by Ontario Nature and the KFN received the W.E. Saunders Award in 2014 for the Flora as an example of citizen science at its best. Until COVID19 intervened, the club ran an active field trip program and continues to connect on line. To learn more see https://kawarthafieldnaturalists.org.