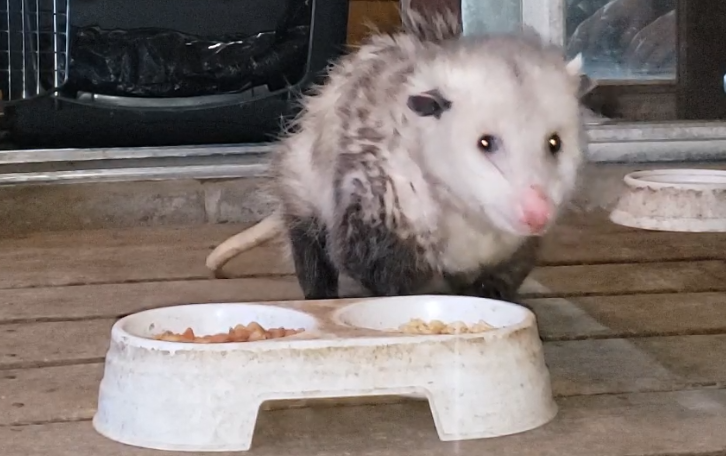 Shades of Hope Wildlife Refuge is an organization that has made a habit of bringing animals back from the brink. There is no better example of that than its recent rescue of a badly wounded opossum. The whole rescue started with a call on April 4, 2021 from a concerned citizen in Keswick, Ontario who noticed an injured opossum that appeared to be very close to death. It was also reported that one of the animal’s legs was so badly injured that it was only able to walk using three legs. Once the opossum was in the care of the Shades of Hope team, matters were further complicated when X-rays determined the opossum also had a shattered pelvis. Over the next several weeks, the team at this reputable wildlife refuge worked their magic. This heartwarming animal rescue effort came to a successful conclusion when the previously wounded opossum was returned back into the wild on May 27, 2021. Before the animal was released, it was back to full size, showed no signs of any wounds, was using all 4 limbs to walk, and had a healthy appetite.

The organization's Founder & Board President, Gail Lenters, stated that while opossum don't live too many years, and this injured one was older, it still deserved a chance. She mentioned that the joy that she, their team members, and their donors get from a successful animal rescue such as this one is hard to put in words. There is just something very special about their organization's ability to treat and return animals back into the wild. Lenters added that this type of effort from wildlife rescue organizations such as theirs is not something that should be easily overlooked as the important wildlife population throughout many areas of Canada continues to slowly dwindle in numbers.

Lenters went on to say that their organization is a registered charity located in the Town of Georgina, Ontario, Canada. They are also fully licensed by the Ministry of Natural Resources and Fisheries and Canadian Wildlife Services. She said the fact that they were able to receive this type of registration and licensing acknowledges the effort that all of the team members at Shades of Hope put into what they do. This wild animal rescue organization covers the needs of injured and orphaned animals over a wide area that includes Greater Toronto and many other municipalities located throughout the South-Central Ontario Corridor. The organization's Founder says that their mission is to medically treat, nurture and rehabilitate injured and orphaned native wildlife with the main goal of getting them healthy and then releasing them back into their natural habitats. They have successfully treated and released not only opossums but also rabbits, deers, coyotes, and even bears. Their efforts are not just directed towards land animals either as they have an impressive track record when it comes to treating and returning birds back into the wild too.

Lenters went on to say that while they have enjoyed great success rehabilitating injured animals, their next biggest challenge is funding. That’s because they are a total donor-dependent organization that gets absolutely no government funding. She says that many people do not realize how much it costs to pick up an injured animal, treat it, provide it with healthy food, and then humanely release it back into the wild. This has also forced Shades of Hope to get very creative when it comes to how they generate their revenue to operate. The organization's Founder says that this all starts with more traditional monetary donations. They also have a wish list posted on Amazon Canada where donors can directly purchase and ship some of the special equipment and other needs that their animals and birds in residence require. Shades of hope also has a program where animal lovers can donate used cars, trucks, RVs, boats, and motorcycles to help their cause. She stated that those at their organization and the animals they treat greatly appreciate all of those that help donate to save wild lives. They simply would not exist if it was not for the kindness and generosity of their donors.

For more information about Shades of Hope Wildlife Refuge, contact the company here: