Justin Charles of Rowlett, TX based IES Texas Solar was recently invited to an interview on commercial solar panel financing with Artifact. The company has just made portions of the interview and transcripts available through their blog space, and they invite their community to examine its contents and direct any further inquiries on the subject to their representatives. 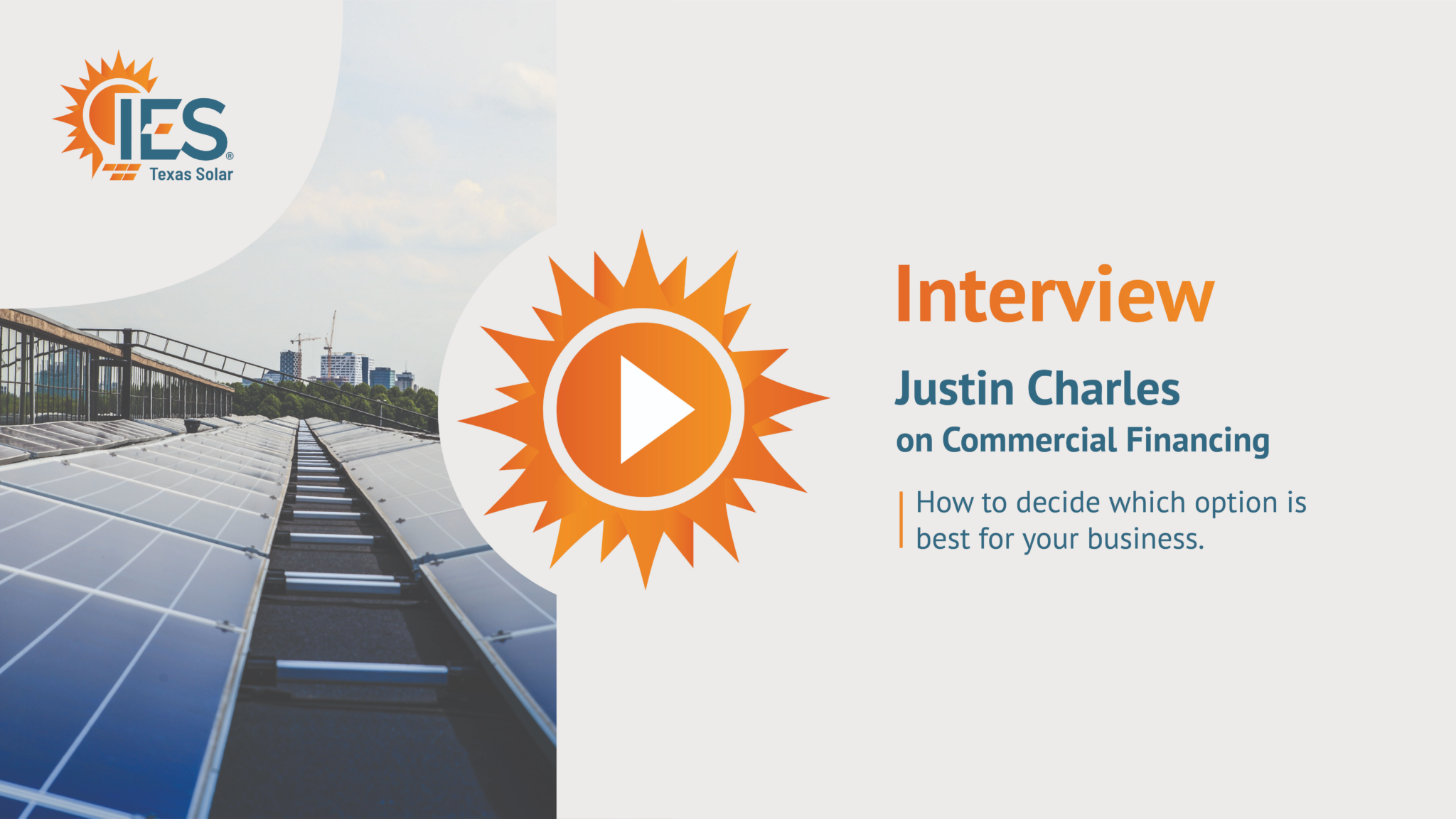 IES Texas Solutions understands that each business is unique in terms of their energy requirements and their ability to finance a shift to solar power generation. As such, the company works with a wide spectrum of commercial entities that range from small enterprises to large corporations. While the company believes that solar power is a future most will invariably find is an excellent investment, the fact remains that it still carries a profound cost — even despite recent advancements in the technology and an overall reduction in prices.

Charles explains that businesses may wish to consider their energy generation in terms of a spectrum as well, beginning by reducing their energy consumption instead of outright attempting the leap to energy production with solar energy. However, he says that there are four distinct paths that a business can take to finance their solar panel installation: cash, assistance from banks, capital leases and operating leases. While some commercial enterprises prefer to enter into power purchase agreements (PPA), these are usually the domain of nonprofits and government entities.

The issue here is that the US generally subsidizes solar energy via tax credits (which are essentially non-refundable). As Charles points out, an entity that does not have a tax liability would find it extraordinarily difficult to take advantage of this type of tax credit.

“The only method that our government currently allows for a nonprofit or government entity to ‘pass’ that tax credit value to someone else,” Charles says, “is through a power purchase agreement. They can’t do it with an operating lease. With an operating lease, the entity that is the end recipient has to have had tax liability to begin with or been a tax paying entity. So, a PPA is really the only method that a school or church or government can get any credit for those tax benefits. And a power purchase agreement works where a private entity, an investor of some sort, buys the system, installs the system and then gives that third party entity — like the school, the church, the township — they sell the energy to them at a rate that is, in theory, less than they could buy from the utility company directly.”

Alternatively, some may consider seeking a similar rate with their utility provider, but this will typically only result in a rate that is fixed for a short period, such as 3-5 years. PPAs, however, can lead to a utility rate being set between 25-35 years from a solar provider. This lengthier period has a two-fold advantage: security and the assurance that no more effort will have to be expended on this front for quite some time. This is bolstered by the fact that the entity will not even have to concern themselves with performing maintenance or repairs; the provider themselves is incentivized to invest in this since their income and revenue stream is based on the system being as productive as possible.

Crucially, Charles brings his community’s attention to the fact that a key bit of negotiating can be done at the end of this period. At the end of the PPA term, the provider can choose from the following: extending the PPA term, selling it to the entity for fair market value or removing the system entirely and restoring the area to its pre-installation condition. Two factors are important to note here, he says. One, the system will now have a greatly reduced price (even at fair market value) by virtue of its age. This would make it more affordable. On the other hand, since the provider had incentive to keep it running in peak condition, the entity will likely be purchasing a fully functional system that still contributes greatly to their energy production requirements.

Charles explains, “At the end of that term, they say, “Hey, we want $50,000 for the system and you say, nevermind, take it out, restore it to factory or original settings.” And they do the math and say, “Well, it’s going to cost us $100,000 to do that, nevermind, forget it, you keep it.” That’s what a lot of them are banking on — is that by the end of it, it’s going to be worth less than restoring it. And they’re going to force them to either sell it to them cheap, or they’re going to get the system for free, which isn’t a guarantee but that’s what they’re hoping.”

Those who are interested in a solar panel power purchase agreement can find a great deal more information on the subject in this blog post (which is freely available on the company’s official website). Alternatively, Charles encourages the community to reach out to his team if they wish to discuss their solar needs with an expert. They are actively growing their business and accepting new clients.