Florida family law attorney Russell Knight releases a new article (https://divorceattorneynaplesfl.com/how-do-you-get-legally-separated-in-naples-florida/) explaining how legal separation works in Naples, Florida. The lawyer mentions that there is no legal separation in Florida. Unlike other states in the United States, Florida does not have a legal status for legal separation. In Florida, being legally separated simply means that a married couple is not living in the same household.

“Most people who inquire about a legal separation are, in fact, looking to draw a line in the sand as to when their newly acquired property no longer is marital. To invoke rights in court between you and your partner you must file a petition for dissolution of marriage. In the alternative, without filing a petition for dissolution of marriage you could prepare a written agreement between you and your spouse which would spell out the terms of your separation,” says the Florida family law attorney. 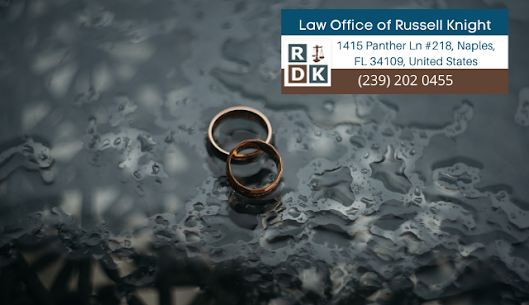 The lawyer explains that to be legally separated in Florida, an individual must file for divorce or enter into a written separation agreement with their spouse. Filing for a petition for dissolution of marriage can be important in fixing the valuation date of marital property. Another reason that people inquire about legal separation is when they are looking for support from their spouses but divorce has not been filed yet.

Attorney Knight also adds that it is possible in Florida for a spouse to file for support even without seeking a divorce. Once the divorce is filed, all claims for support will then come under the divorce filing. Also, if the spouse was living in a different state, they may be able to file a motion for support against a Florida resident.

In the article, the Florida divorce attorney says that according to the Florida Statute Section 61.075 (7), the date for determining the value of assets and the amount of liabilities identified or classified as marital is the date or dates that the judge determines is just and equitable given the circumstances.

According to attorney Russell Knight, “Legal separation does not exist in Florida but there are many legal options available in Florida that allow you the same benefits as a legal separation.”

Lastly, the divorce lawyer emphasizes the importance of having a skilled lawyer who may be able to help with matters such as asset division, child custody, or spousal support. An experienced lawyer may be able to help the client understand their rights and receive a favorable outcome.