Florida divorce lawyer Russell D. Knight releases a new article (https://divorceattorneynaplesfl.com/cohabitation-agreements-in-florida/) explaining cohabitation agreements in Naples, Florida. The lawyer mentions that these days, people are getting married less and less often. In Florida, a relationship can be what an individual wants it to be and under Florida law, the terms of a relationship may be enforceable whether in an oral or written cohabitation agreement.

“A cohabitation agreement is just like any other contract two people would enter into asking for assurances from each other in the present and future. In the old days, people didn’t want unmarried people contracting with each other because that looked a lot like prostitution. Today, however, all contracts between unmarried adults in Florida will stand so long as they are not purely for sex,” says the Florida divorce lawyer. 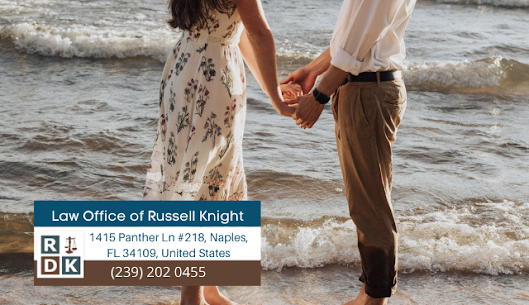 The lawyer explains that even if the relationship includes having sexual intercourse, that doesn't turn a cohabitation agreement into a prostitution contract that can be voided. A cohabitation contract will always include non-sexual terms that will make the agreement valid.

Attorney Russell D. Knight also adds that a contract should be in writing so that the terms may be memorialized and interpreted. The contract and its signatures represent the offer, acceptance of the offer, and the sufficient specifications, however, there must also be some kind of consideration in addition.

In the article, attorney Knight adds that in a cohabitation agreement, consideration is something of value that is given by both parties which induces them to enter into the contract. Consideration can be anything including mutual contribution to housing expenses, cleaning the house, taking care of one another, and other things aside from sex.

Lastly, attorney Knight emphasizes the importance of having a competent lawyer who can explain the complicated laws surrounding cohabitation in Florida. A skilled lawyer may be able to help clients understand their rights.

The Law Office of Russell Knight was established in 2009 by the divorce attorney Russell Knight. The lawyer’s love for family law is demonstrated by the numerous articles personally written by the lawyer. Russell is a licensed lawyer throughout Florida and Illinois. The attorney has a legal practice in both states and employs an entire staff of paralegals and attorneys in the two states of Chicago, Illinois, and Naples, Florida. Contact them today at (239) 202-0455.