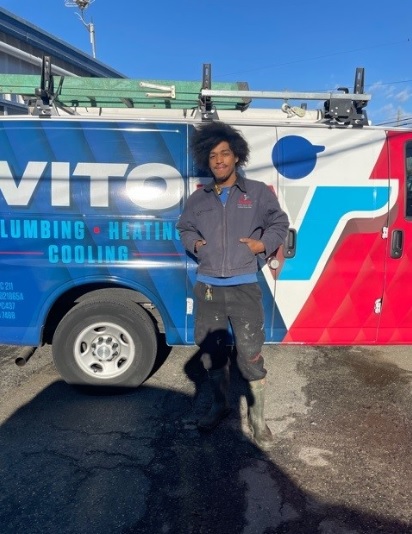 Rockville, MD - As a young bass player in his school’s band, Vito Services Commercial Plumber Edwin Garcia taught himself a trick to deal with his stage fright.

“I just pretend everyone in the audience is clapping for me,” said Edwin. “Like going crazy and clapping loudly for me. I tried some other tricks but that one always seemed to work so I still use it today.”

Edwin, who has worked as both a Residential Plumber and Commercial Plumber during his five years at Vito Services, will be counting on that trick along with his vast plumbing knowledge as he heads to the ABC National Craft Championships (NCC) later this month in San Antonio, Texas. There he will compete in the National Plumbing Competition against 27 other plumbers, with the winner taking home the grand prize of $500.

Edwin, who is studying to receive his Plumber Journeyman License, won the local ABC Plumbing Competition through his trade school in Prince George’s County, MD, to earn a spot in Nationals. Currently, he is in the final stretch of the four 10-month classes required to earn his Journeyman Plumbing License.

Edwin didn’t think of competing but signed up after his instructor told him he thought he could win. He was encouraged by how well he did during the local competition and now has his sights set on winning Nationals. “It will be hard, it will be nerve-wracking, but I think can win,” Edwin said. “Why not?”

The National Craft Championship invites 210 competitors to vie for gold in 16 competitions with skills on display across 13 crafts. Each competition consists of an online exam, which accounts for 25% of the total score. Following the online test, the National Plumbing competition consists of an assigned six-hour project, which accounts for the remaining 75% of the plumbers’ score. Their plumbing work will be scored by a 4-Judge Panel.

The competition objectives are to demonstrate safety along with craft interdependency and teamwork, simulate working conditions where planning is critical to success, and highlight individual leadership and workmanship skills as the project is assembled and completed. The National Craft Championships annually highlight the achievements of the men and women who represent the future of the construction industry as craft trainees and apprentices travel from across the country to demonstrate their superior skills, training, and safe work practices and compete for top honors in their chosen craft. For the training sponsors, employers, and ABC chapters, the NCC demonstrates a staunch commitment to the career paths the construction industry offers.

National Craft Championship Director Jan Prakke says he looks forward to the National Plumbing Contest each year, and the 2022 Plumbing will feature 28 competitors, the most ever at the Craft Nationals.

“I make sure to never miss the plumbing competition,” Prakke said. “It’s fun to see the guys stress out during the competition. Someone ALWAYS freaks out and about 30% usually don’t finish the live test. A lot of times they just overthink it.”

“We’ve had different Masonry and Drywall competitions in the past,” said Prakke. “I’m looking forward to the Arc Welding this year … but my favorite is always the Team Competition.”

The local ABC Competition consisted of a 4-hour in-person contest that tested many plumbing skills, including setting up a plumbing drain line, simulating a drain stack, soldering copper lines, installing valves, using a torch rig, and eventually creating pipping that produces no leaks.

Due to the pandemic, the written test is now proctored online before Nationals. Edwin recently completed the 70-Question Test and feels even more confident heading to Texas.

“I’ve never been to Texas, so I’m excited about that,” said Edwin. “I am a little nervous … but I’m pretty focused on the competition and can’t wait to get going.”

Win or lose, Prakke says the contestants will all remember their time at Nationals.

“It’s a great event that highlights the crafts and all of the amazing work these men and women learn and eventually perfect,” said Prakke. “And if he doesn’t win, he’ll come home with lots of prizes, they always do. It will definitely be an event they all remember for a very long time!”

Vito Services is a full-service plumbing, heating and air conditioning company, proudly serving the Alexandria, VA, Rockville, MD and Washington, D.C areas. Since 1934, they have been providing their community with expert repairs and quality workmanship for both residential and commercial customers. To learn more about Vito Services or to schedule an appointment, visit them online at VitoServices.com or by phone at (301) 315-6100.