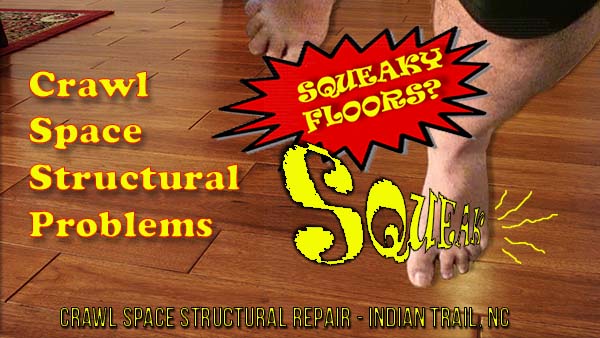 Monroe-based Charlotte Crawl space Solutions is a company that specializes in crawl space structural repair and problem-solving in Indian Trail and other nearby North and South Carolina areas. This company offers these services because it realizes that crawl spaces are one of the least frequented areas around any home or business and this can lead to many problems associated with them going undetected. The most problematic of which is the foul odor and damage causing mold that results from prolonged moisture buildup. Charlotte Crawl space Solutions owner, Carlos Rendon, discussed some of the ways that they get rid of the common problems that occur in crawl spaces.

Rendon, says, “Most homeowners in the Charlotte area will readily admit that they have never even been in the crawl spaces under their homes. We understand that fully because these areas are dark, damp, dirty, and often the homes for the many dangerous black widow spiders that are found in our area. This does, however, lead to many crawl space problems going undetected. Eventually, these problems may build-up to the point where they cause foul odors or structural wood rot. We want people in our area to understand that these problems can be corrected and how we go about doing that.”

Since moisture is the biggest culprit when it comes to crawl space problems, Rendon stated that when a homeowner reports such things as foul smells or soft floorboards, they must first take steps to stop the moisture source. This can include having leaks in plumbing lines repaired, improving the drainage around a home’s foundation, and encapsulating a crawl space to seal out moisture. They may also better vent a crawl space so the odors that originate in them drift outside instead of upward in a home. He says that another good way to eliminate crawl space odor is to make sure that no critters can get into this under-home area. This will go a long way toward preventing crawl space odors that are caused by the buildup of the urine that’s left behind by cats and other animals.

Rendon also talked about how their crews are highly skilled when it comes to doing crawl space structural repairs. These types of repairs deal with the replacement of the wooden structures that are commonly found in crawl spaces. This includes floor joists, sill plates, rim joists, girders, and piers. When these wooden structural elements are damaged due to the presence of wood rot, mold, termites, or carpenter ants, the supporting structure in the floors can feel soft, bouncy, or squeaky. He stated this happens because those floors now have nothing solid underneath them to provide support. The problem could also come from foundation or pier settling which causes a home’s floors to become uneven. According to the company owner, once again this usually leads back to there being too much moisture present in a crawl space. This damage can occur as a result of high moisture levels in a crawl space over a prolonged period or an event that causes large amounts of water to go into a crawl space all at once. Once the moisture content gets high enough in a crawl space, it will encourage mold growth and give termites and carpenter ants an easier time making a meal of a home’s wooden crawl space structure.

The company owner added that for those home and business owners who want to take extreme measures to ensure that moisture never again becomes a problem in their crawl spaces, they offer what is called the Atmox system. This is a system that uses inside and outside sensor readings to determine when the outside air is dry enough to have fans blow it into a crawl space.

Those that have used this company’s crawl space repair solutions state they have been very satisfied with them. Jonathan R wrote, “We had a problem with rotting floor rafters due to the buildup of mold in our crawl space. After several phone calls to other companies with no answer, we finally reached out to Charlotte Crawl Space Solutions where we were put in touch with Michael. He asked all the right questions and was at our door the next morning to inspect our crawl space. Michael gave us a very detailed report on our situation and the extent of the wood rot caused by our mold problem. We decided to go with him and are very glad that we did. He is very meticulous and did a great job at a fair price. Highly recommended.”

Charlotte-area home and business owners that would like more information on the services that Charlotte Crawl space Solutions offers can call them, send them an email, or refer to their website at charlottecrawlspacesolutions.com. In addition to preventing and resolving crawl space problems, this company also specializes in basement waterproofing, mold remediation, and home and building structural wood repair services.