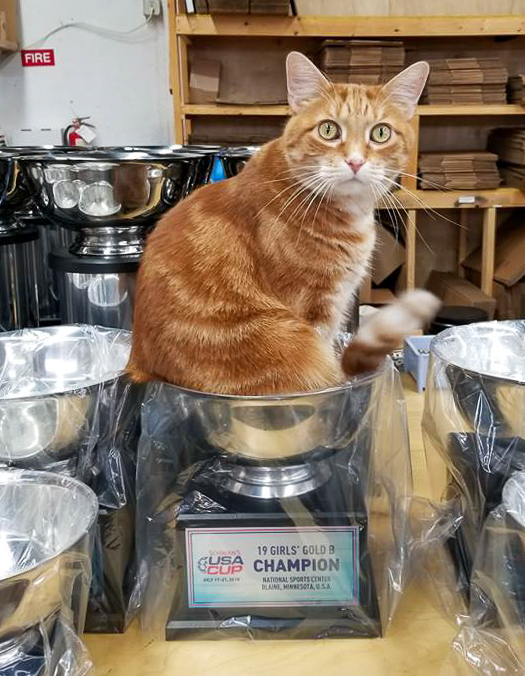 Minneapolis, MN – When a retail store is striving to create wonderful experiences for their customers, one of the most important factors is the kindness and attitudes of the store’s employees. Viking Trophies, the largest trophy shop in Minneapolis, could not agree more. In fact, they have taken this concept above and beyond by declaring their cat, Charlie, the official store greeter because of his friendliness and ability to comfort those around him. Viking Trophies is excited to announce that Charlie was recently featured in a local newspaper, as well as a local television station.

On September 15, Viking Trophies was delighted to see Charlie in the Star Tribune newspaper. Star Tribune published an article about well-known cats that live in stores in the Twin Cities area, with Charlie being one of these beloved felines. The author of this article, Julie Kendrick, explained that Charlie is a positive influence on the people around him. The owner of Viking Trophies said that there is a noticeable difference in a person’s voice once Charlie comes and says hello. Charlie often naps on a desk, sits in the sun outside the backdoor, and of course, performs his social duties as the official store-greeter.

Two days later, on September 17, Charlie appeared on a local news station called CCX Media. A two-and-a-half-minute video was made about Charlie, showing footage of him inside the store. Several Viking Trophies employees appeared in the video as well, taking about Charlie, what he does, and his influence on the people around him.

Viking Trophies seeks to give every customer who walks in the door a wonderful, enjoyable experience. Charlie has surely been a significant asset in achieving this goal. For more information regarding Viking Trophies products, such as custom awards, engraved trophies, or personalized gifts, give Viking Trophies a call today at (763) 537-3422 or visit their website at https://www.vikingtrophies.com/.

For more information about Viking Trophies, contact the company here: