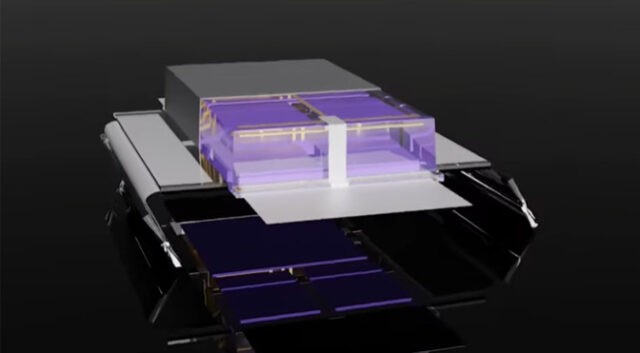 We’ve seen tiny robots before, but never like this. Researchers from Cornell have created the first microscopic robots that operate without any form of external control. These nanomachines have all the hardware they need on board, including a basic electronic brain. They just need a little solar energy, and off they go. They’re currently very limited devices, but the designers envision almost unlimited applications.

The research, which was led by postdoctoral researcher Michael Reynolds, built on research that was already happening at Cornell. Previously, Cornell set the world record for the smallest walking robot, but the new version is infinitely smarter. Reynolds developed robots between 100 and 250 micrometers across with an electronic circuit that controls the robot. That eliminates the need for an external control mechanism like heat or magnetism, which is required for other tiny robots. Reynolds says those robots are more like marionettes than true robots.

The brain inside these robots is a simple complementary metal-oxide-semiconductor (CMOS) clock circuit. It contains just a thousand transistors, which is nothing compared with the billions that exist in today’s full-scale computer processors. The purpose of the circuit is to generate phase-shifted square waves that control the walking gait of the robot, which it does automatically when the integrated photovoltaic cells are exposed to light. The team tested three different designs with two, four, and six legs. The fastest among them can walk at a blistering 10 micrometers per second — that’s pretty fast given the microscopic scale.

The circuits are just 15 micrometers tall, forming not only the brain but also the main body of the robot. They feature 13 layers of photolithography to etch the brain itself, as well as the platinum-based actuators that serve as its legs. Reynolds and former postdoctoral researcher Alejandro Cortese designed the first of the CMOS brains several years ago, which was then built by commercial foundry XFAB. The completed robots are about 10,000 times smaller than existing robots with CMOS electronics.

The circuit itself isn’t the real innovation here. Cornell physics professor Itai Cohen explains that lowering the power consumption of the chip was the key to making these robots mobile. The low voltage and current requirements make actuators at this scale feasible, which they have not been in the past. Reynolds designed the microbots to be extensible, so other researchers may be able to add sensors or control mechanisms. Eventually, it may be possible to communicate with the robots and issue instructions that will be executed by the integrated circuits. These machines could one day manipulate bacteria, trace chemical signatures, and even perform microsurgery inside the human body. Or maybe they’ll become a science-fictional gray goo that consumes the world. Time will tell.